Race season is just around the corner, and the Eastern Super Mini Cup Series is pleased to release the schedule for its 2016 season. This will be the 6th season of competition for Mini Cup cars in Atlantic Canada, and will feature 6 events during the summer months. The 6 race schedule will be split up into two-3 race series at 2 venues. 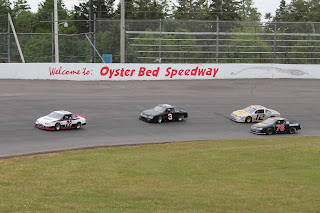 The season will open up on Sunday June 5th at Oyster Bed Speedway. The 1/4 mile oval in Oyster Bed, PEI will also contest races on August 13th, and August 27th. Defending champion Matt Watson has the most victories at the track with 3, which included a sweep of both events at the track last year. Indications are that Watson will moving up to another class in 2016. 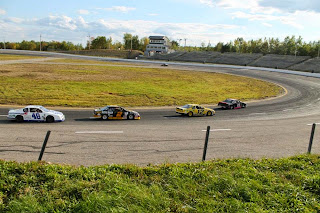 Speedway Miramichi hosts the remaining trio of events. On June 18th and July 30th the series takes on the 1/3 mile oval, and returns again on September 17th as part of the Chi City Showdown, where the 2016 champion will be crowned. Two time series champion James Matchett has the most wins at the Northern New Brunswick oval, with 5 wins.

The 2016 Eastern Super Mini Cup Series schedule is subject to change, and dates may be changed or added throughout the season.

Anyone interested in sponsoring events for the Eastern Super Mini Cup Series in 2016 can contact the series at easternminicupseries@gmail.com

Last weekend the Eastern Super Mini Cup Series made its only stop of 2015 at the Centre for Speed in Shediac to contest the 7th and final race in the 2015 season. This race would also be the 26th in series history, and 6th at the Centre for Speed. Matt Watson continued his dominance, and swept the season after winning the feature win. Watson is now the sole owner of many series records, but which ones exactly? Quite a few!

The 2015 season is in the books, and the Eastern Super Mini Cup Series would like to thank all the tracks for their hospitality in 2015, all our sponsors who help make this possible, the drivers for putting on great shows, and most importantly all our fans! We look forward to 2016!

Get out the broom, because Matt Watson made it a clean sweep Saturday, winning his record breaking 7th consecutive feature race Saturday at the Centre for Speed, to sweep the 2015 ESMCS season, and become the Atlantic Champion for the Mini Cup division. Watson held off hard charging drivers including Chris Wilson, Courtney O’Blenis, & Steven Curtis on a Green-White-Checkered Restart to take the 20 lap feature at the Centre for Speed. This came after Watson finished 2nd in the heat race in a photo-finish, losing just his 3rd race of the year. By winning 15/18 races and racking up 326 points, Watson’s 2015 season will go down as the most dominating season in series history.

Wilson gave it all that he had, but he had nothing for Watson, forcing him to settle for a 2nd place finish to wrap up the year. Wilson previously won at the Centre for Speed in 2012, as had Courtney O’Blenis, who was subbing for Jared Tozer Saturday. O’Blenis started at the back and drove to a 3rd place finish, in just her 3rd series start, and 1st start since her win in 2012. Steven Curtis finished 4th, which was good enough to hang onto 2nd in points by a mere 2 points. Rounding out the top 5 was Mark Ferguson, who picked up his first top 5 finish in 3 months, and ended a streak of 3 consecutive DNF’s; that was as good as a win for Ferguson who held on to 4th in points in his sophomore season.

A number of drivers faced problems during the 20 lap feature. Rookies Kyle Maher and Mike Weagle failed to finish, after they faced mechanical problems during the race. They finished 6th and 7th respectively. Kirk Sheasgreen started on the pole and led lap 1, but when a caution came out after the completion of lap 1, another car made contact with Sheasgreen as they didn’t realize the yellow was out. That would damage Sheasgreen’s car enough to end his night. Rounding out the field was Dave Griffin, who was collected in the lap 1 wreck, hitting the wall hard after trying to avoid the incident.

A total of 2 yellows slowed the race. The first was the lap 1 yellow, which occurred when Mark Ferguson spun around in turn 4, and collected Griffin. The other was a self-spin by Steven Curtis on lap 19. Curtis was running 3rd at the time. There was a total of 2 lead changes among 3 drivers. Sheasgreen led lap 1 before being the incident under yellow. Chris Wilson got the lead on that restart and led 2 laps, before Watson grabbed the lead and paced the final 17 laps of the race.

The 10 lap heat race was an exciting show that went caution free. Mike Weagle picked up his 1st career Mini Cup victory by winning the race over Matt Watson in a photo finish. Kyle Maher finished the heat race in 3rd, while Chris Wilson & Courtney O’Blenis rounded out the top 5.